This is my submission for the Weekly Game Jam 93: Fishing. It is my second game ever made and is a bit like "QWOP" or "Getting Over It". There is currently only one level, but I feel like it should provide enough of a challenge for anyone sampling during the jam.  I am a novice game dev so please include how it could be better in a comment, I love constructive criticism. 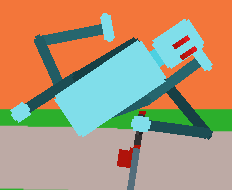 Somewhere along the line this turned into a horror game... my poor, poor robot. The rock proved too great a challenge for me, but I'll give what feedback I can!

Really like this game. As with last week, I like the art. You've got a good atmosphere with the background music as well, matches up well with the relaxed gameplay.

You could really do with some sound effects, like clanks and such when the robots limbs hit the ground (Don't overdo it obviously, especially with how jittery it can get -- you don't want to play the same sound effect multiple times at once). Maybe a robotic groan when the player is stuck at the rock for a long time.

In the same vein, it'd be funny to see the robot change expression based on it's current level of contortion. For example, my robot up there might have eyes that show that it's in pain. You've got a cute robot character here, but it's pretty emotionless -- there's not a lot of feedback on any action.

Another thing is that the buttons don't have enough feedback. I see that there's a little movement when you press one of the limb buttons, but I think it should probably light up/change color to show your currently selected limb.

I don't know how much you need the slider -- I feel like it just adds another control to an already complex set of controls. It would probably work about the same with a set level of speed (Then again, I only made it to the rock so...).

The fishing rod doesn't really serve a purpose at the moment (It doesn't even have collision!). Would be interesting to see it incorporated as a sort of grappling hook or something similar. Would likely make the game easier, though.

Excellent! Yes I wanted to do some of those, but my knowledge in Unity is still kind of novice to intermediate. I didn't even think of having the fishing pole as a hookshot, that seems so obvious now. Thank you thats all good stuff!

The game looks cool but,

It took awhile for me to work things out

apart from that its cool :) 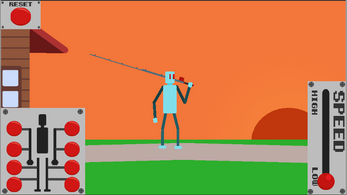 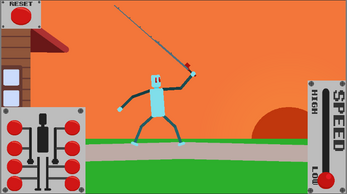 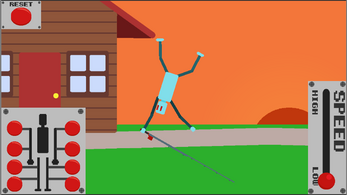